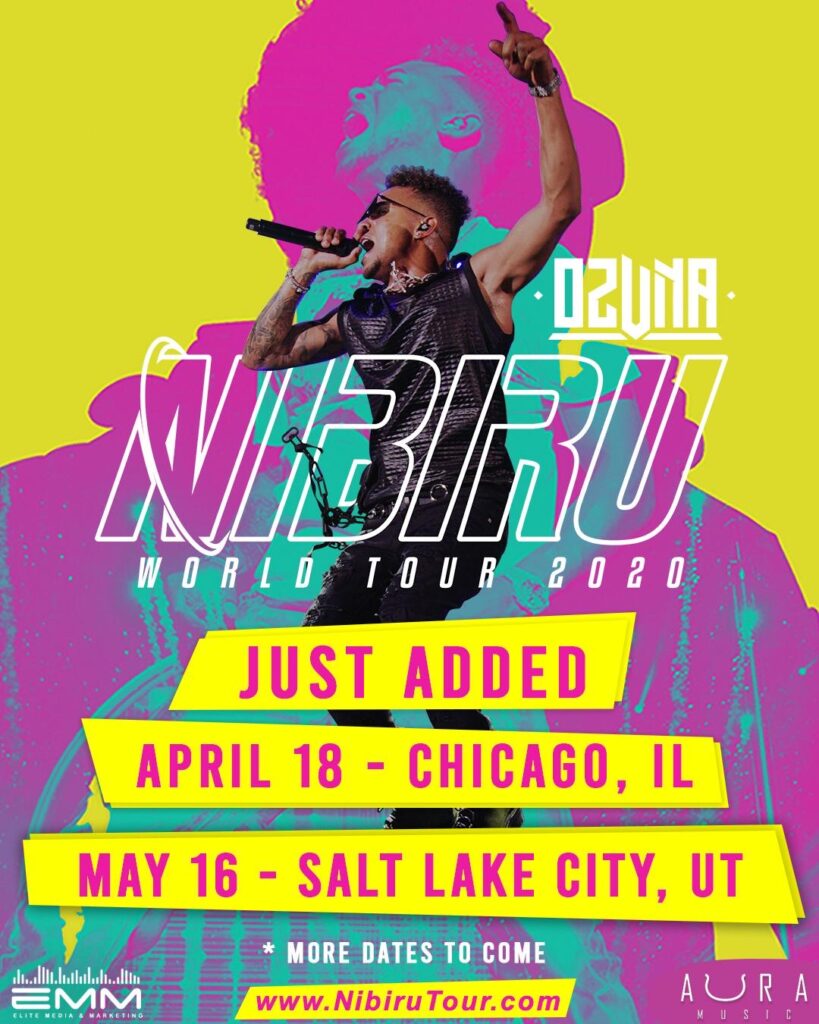 Miami FL, February 4, 2020.  Ozuna, one of Latin music’s most influential artists today, returns to the touring stage in 2020 with the much awaited NIBIRU WORLD TOUR. Presented by AURA Music, Elite Media & Marketing (EMM) and Live Nation, the U.S. leg of the tour kicks off on April 2, 2020 in Atlanta, GA and will crisscross the country with the NIBIRU journey. Two new concert dates were announced today: Chicago on April 18 at Allstate Arena And Salt Lake City on May 16 at Vivint Smart Arena.

Tickets for the newly announced dates will go on sale to the general public beginning Friday, February 7 at 10am local time. See the venue’s website for box office, presale dates and online tickets purchasing instructions. Tickets for all previously announced concert dates are currently on sale. More cities and concert dates will be announced soon. Go to  http://nibirutour.com/  for the latest announcements.

With over 69 titles on the Billboard Hot Latin Songs chart in the last 3 years, fans of the beloved superstar can expect a plethora of his song hits performed as he only can do in the genre: live with a full band and a state-of-the-art lights, sound and pyrotechnics; in addition to new fan favorites from his recently released album NIBIRU.

Latin Music Superstar Ozuna is a multi-platinum Puerto Rican singer/songwriter leading the wave of the new generation of Latin music artists. Among his numerous achievements, in 2019 he broke the record as the biggest winner in a single year in the history of the Billboard Latin Music Awards. He also won Contemporary Latin Songwriter of the Year at the 2019 BMI Awards and made the 2019 Time Magazine’s 100 Most Influential People list. He currently ranks among 2019 Nielsen Music MidYear Top 5 Latin Artists and Top 5 Latin Albums. In 2018 he was named YouTube’s most-viewed artist globally and also holds the record as the artist with the most videos with over one billion views, seven in total. His debut studio album “Odisea” became the longest-leading No. 1 album by a male artist on Billboard’s Top Latin Albums charts, with an impressive 46 weeks atop; while his sophomore studio album “Aura” debuted No. 7 on the all-genre Billboard 200 chart and remained #1 in the Top Latin Albums chart for 17 weeks.

He has an impressive collection of chart-topping collaborations with the biggest names in Latin Urban music, like Daddy Yankee, Luis Fonsi, and Nicky Jam; as well as globally acclaimed megastars, such as DJ Snake, Cardi B, Selena Gomez, Post Malone, Jeniffer López, Snoop Dogg, and Rosalía, among many others. Ozuna currently holds four Guinness World Records official titles for his impressive musical achievements.

WHAT THE MEDIA IS SAYING ABOUT OZUNA:

“The Golden Child of The Digital Streaming Era”

“The new king of reggaeton”

“The Future Is Ozuna”

“One of the hottest reggaeton stars on the planet”